Is your child developing facial changes due to an enlarged adenoid? 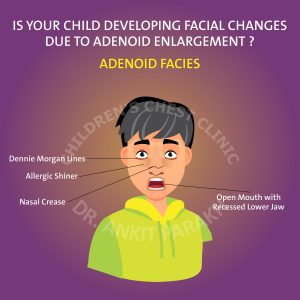 What are the other problems if adenoids are not treated?
Persistent and untreated enlargement of the adenoids can lead to many problems. Enlarged adenoids can lead to blockage of the eustachian tube (tube which connects ears to nose & helps drain fluid from the middle ear). Blockage of the eustachian tube leads to build-up of fluid in the ear leading to ear infections and hearing loss. This condition is described as “glue ear” or serous otitis media. Enlarged adenoids can obstruct the breathing passage during sleep leading to snoring, difficulty in breathing, mouth breathing, gasping and pauses during breathing. This condition is called obstructive sleep apnea or OSA.

Can adenoid facies be corrected?
The ideal treatment for persistently enlarged and obstructing adenoids to remove them surgically is a procedure called “Adeno-tonsillectomy”. It is important to understand that the surgery should be performed early to avoid further complications. Adenoid facies occur due to anatomical changes in the facial structures because of a persistently enlarged adenoid. “Adeno-tonsillectomy” might not revert the changes of adenoid facies. In many cases by the time a child develops adenoid facies the adenoids have shrunk substantially often negating the need for surgery. Adenoid facies once established require surgical correction including effective orthodontic treatment. This needs to be dealt with by a pediatric dentist.

If your child having any symptoms suggestive of adenoid hypertrophy or developing adenoid facies you need to consult a pediatric pulmonologist for proper evaluation and management.

Adenoids & Tonsils: What happen when they enlarge in children I

Facial changes due to Adenoid enlargement in children I