Bronchiectasis is a disease of the airways inside the child's lungs. In bronchiectasis the airways get damaged which leads to airways becoming widened and flabby. In addition the damaged airways cannot clear out mucus or phlegm leading to its accumulation. The accumulated mucus attracts bacteria leading to frequent infections which further damages the airway wall. This is a cycle which keeps going on leading to continuous and increasing trouble.

Children with Bronchiectasis can also have periods of increased cough with yellow/green with or without fever called as Bronchiectasis flares or exacerbations.

What are the common causes of bronchiectasis in children?
The commonest cause of Bronchiectasis in developing countries like India is lung infections like severe pneumonia, tuberculosis, whooping cough or pertussis and 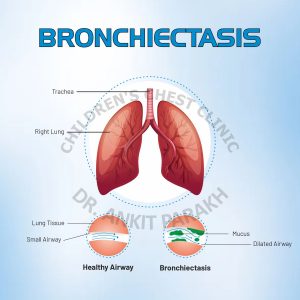 Specific treatment of the cause of bronchiectasis is essential to stop the progression of the disease.

If your child gets frequent wet coughs or persistent cough or repeated pneumonias the child needs investigations for Bronchiectasis. Get in touch with a child chest specialist for proper diagnosis and treatment advice.