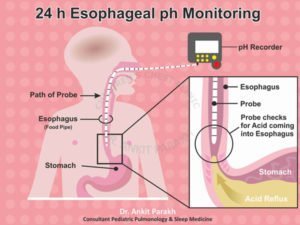 The esophagus also called as the food pipe is the tube that connects the mouth to the tummy/stomach. The valve at the bottom of the food pipe/esophagus (lower esophageal sphincter) opens up to let milk and food down and closes to stop acid from coming up. Gastroesophgeal Reflux or GER is the passage of gastric contents upwards into the esophagus or food pipe. This usually happens when this valve opens or closes at the wrong time. Few episodes of GER are common in infants and young babies (baby spits up or vomits) and usually doesn’t cause other symptoms.

When children have additional symptoms or complications it is called as gastroesophageal reflux disease or GERD. These symptoms could be refusing to eat or not gaining any weight, starting with vomiting at 6 months of age or older, fussy or having pain after eating etc.

To perform a scintigraphy milk, breast milk or formula is mixed with a small amount of "tracer" medicine. This "tracer" is a small amount of radioactive material. There are no side effects and the medicine will not change the taste of the milk. The scan begins while the baby is swallowing and will continue for approximately one hour. Your baby will lay on his back on the table with the gamma camera underneath. The gamma camera can image the movement of the milk with the tracer. In children with GER the tracer is seen to move up into the esophagus and can be seen coming upto the throat.

This test measures the amount of reflux (both acidic and non-acidic) in your esophagus during a 24-hour period, and assesses whether your child’s symptoms are correlated with the reflux. Since it gives details over 24 hours it provides much more information compared to a scintigraphy.

The 24 hour esophgeal ph/impedance test involves the placement of a probe through the nose of the child and place under xray guidance at the lower end of the esophagus as shown in the image. The probe is fixed at the nose of the child. The probe is attached to a small ph/impedance recorder. Placement of the probe takes about 10 minutes. The recording takes place for a 24 hour period and then the probe is removed. The data is extracted and analysed. Child shall be able feed, talk, and breathe without any difficulty during the test. The test is quite safe with no complications.