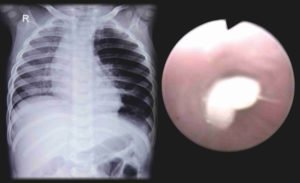 Children of young age explore their environment by seeing, touching and tasting objects around them. They would also unfortunately, put non-food objects in their mouths. Also children of 6months to 3 years do not have molars to chew hard objects like nuts etc. These factors with small airways predispose them to foreign body aspiration.

What is the commonest age group where this problem happens?
This problem is seen commonly between the age group of 6 months to 3 years. But they can be found in older children and adolescents as well.

What are the common symptoms of foreign body aspiration in children?
The common symptoms are bouts of cough after eating a food item (peanut, etc), choking (breath hold, turning blue), unexplained difficulty in breathing, wheezing (a whistling sound from the chest). Doctors may find a difference in the breath sounds on both sides of the lungs and a wheezing sound on hearing with a stethoscope.

Can we detect foreign bodies on a Chest X Ray?
Some non-food items (metallic objects like pins, screw, other small metal pieces, etc. ) can be seen in the airway using a conventional radiograph. However, most food, vegetable matter and plastic toys are not radio-opaque, which means they allow Xray radiation to pass through and hence would not appear on chest Xray. Collapse or overinflation of a part of the lung on the Chest Xray suggest presence of a foreign body in the lungs. It should be remembered that many children with foreign body aspirations can have normal chest xrays.

Is a CT Scan of Chest or MRI of Chest useful to confirm the presence of foreign body in the airway?
No, they are not useful for many reasons. Firstly, it is difficult to pick up foreign bodies in the airways with both CT and MRI. Secondly, they again would need a bronchoscopy for confirmation in case of a suspicion. Thirdly, both a bronchoscopy and CT Chest/MRI Chest need the child to be sedated.

What are the complications of foreign body aspiration in children?
If large they can be life threatening as they can block the voice box (larynx) or the windpipe (trachea). If small they can lodge in the windpipe or the other smaller airways (bronchi). This can lead to obstruction of a portion of the lung, infections and later can to serious long term damage to the lungs.