What is Cystic Fibrosis?
Cystic fibrosis is a genetic or inherited condition which is now increasingly recognized in the Indian sub-continent. This leads to damage to multiple organs of the body but mainly the lungs and digestive system. What is the genetic defect in cystic fibrosis?

Cystic fibrosis transmembrane conductance regulator (CFTR) is involved in the production of sweat, digestive fluids, and mucus. When the CFTR defective, secretions become thick and sticky. What happens to the lungs in Cystic Fibrosis?
Lungs are the primary organs involved in cystic fibrosis. In children with cystic fibrosis the mucus gets thick, viscid and sticky. These secretions plug-up the small airways of the lungs. The small plugged airways get repeated infections and lead to chronic lung damage over time. These problems begin very early in life starting from the first few months of life. 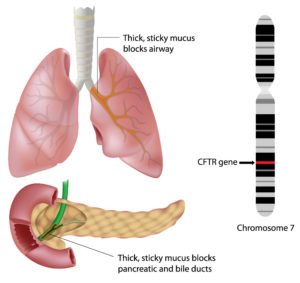 What other organs are affected in children with Cystic Fibrosis?
Cystic fibrosis also affects the organs of the digestive system like the liver, pancreas and intestines. This leads to reduced and ineffective digestive juice leading to impaired food absorption. Hence these children would have large, bulky and frothy stools. Because of poor food absorption children get poor weight gain.

What are the symptoms which suggest Cystic Fibrosis?
Children with cystic fibrosis can have chronic cough, sputum production, wheezing, frequent lung infections (recurrent pneumonia or bronchitis). Children can also have persistent loose or oily stools and failure to thrive (inability to gain weight despite having a good appetite) and poor growth. Since children with cystic fibrosis lose excessive salt in their sweat. Hence, children can get repeated dehydration.

Sweat Chloride analysis is the standard investigation to confirm cystic fibrosis across the world. It involves collection of sweat of the child with a Gibson & Cooke’s method followed by chloride estimation in the sweat. Value of chloride in the sweat more than 60 mmol/L are suggestive of cystic fibrosis. For more on sweat chloride analysis click here. Genetic Analysis with the help of clinical exome sequencing is also possible now.

Children with cystic fibrosis also require a sputum test to isolate micro-organisms in the lungs. In some children if a sputum test is not possible then a bronchoscopy might be needed.

How are patients with CF followed up and managed?
Children with CF would need a long term follow up with a pediatric pulmonologist. They need regular chest physiotherapy, antibiotics, inhaled hypertonic saline and anti-DNAase.